UnionLine has been shortlisted for an award at this year’s Modern Claims Awards.

Your trade union law firm has been shortlisted for the Client Care Award in the Doctors Chambers Modern Claims Awards 2016. The nomination comes just three months after UnionLine was announced as ABS of the Year – 26-100 employees at the 2015 Modern Law Awards.

The winner will be announced at a ceremony in New Dock Hall in Leeds, on Thursday 28 April, hosted by comedian Hal Cruttenden. Winners will be selected by a panel of judges who represent every aspect of the claims industry.

The awards were launched in 2015 to celebrate cross-industry talent and success in embracing opportunities in the changing legal landscape.

Head of Legal Practice at UnionLine, Matt Cordall, said: “This is another significant achievement for UnionLine, following our recent success at the Modern Law Awards. We are especially proud to be shortlisted alongside established law firms with incredible reputations. It is made all the more impressive by the fact we launched less than two years ago.

“Being shortlisted for this award recognises the outstanding service we provide to clients and how we have responded to changes in the legal sector. It is a credit to everyone within UnionLine who has worked to deliver a first class service to our union members.” 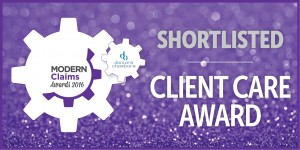