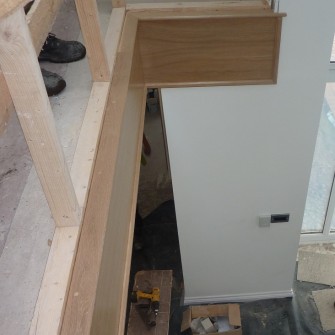 A building firm has been fined £10,000 after a plasterer broke his back when he fell three metres during the construction of a six-bedroom house.

CB Homes Ltd, the main contractor for the development at Little Budworth in Cheshire, was prosecuted by the Health and Safety Executive (HSE) after an investigation found the company failed to ensure adequate guard rails were in place on the first floor landing to prevent falls.

Trafford Magistrates’ Court was told that the 58-year-old Wrexham man, who has asked not to be named, had been fitting plasterboard when he fell from the open landing on 22nd May last year. He suffered two cracked vertebrae along with damage to his spine, hips and legs.

The court was told CB Homes had been managing a project to build seven new homes at Mondrem Green on Chester Road. The company had hired a plastering firm to plaster the inside of the houses but failed to make sure this work could be carried out safely.

The plasterer had needed to use a ladder to reach the first floor, and there was no guard rail in place along the open edge on the landing.

He was carrying a piece of plasterboard when he lost his footing and fell to the ground floor below.

CB Homes Ltd, of High Street in Tarporley, was fined £10,000 and also ordered to pay £1,376 in prosecution costs after admitting to two breaches of the Work at Height Regulations 2005.

Speaking after the hearing, HSE Inspector Laura Moran said: “As the principal contractor on the site, CB Homes was responsible for making sure work at height could be carried out safely.

“If the company had planned and supervised the work properly then it could have made sure guard rails were in place.

“Companies who take on big construction projects have a legal duty to make sure the tradesmen they bring onto the site can do their job safely.

“CB Homes fell well below that legal requirement on this occasion.”